The Dual Value of Personal Accounts of Change from Frontier Innovators

Given this diversity, the allocation of funding and assistance was customized to each enterprise’s unique needs. Assistance ranged from investing in human resource consulting to opening local shops in Nepal to source and sell products from poultry farmers.

So how is it possible to learn from and understand the impact of such a diverse range of activities? We combine developmental evaluation with traditional monitoring and evaluation mechanisms to manage the SFI Program adaptively and understand the value of DFAT’s different types of investments in the ecosystem.

Frontier Innovators employs an agile, responsive management approach, of which the most significant change methodology has been key to monitoring and capturing the opportunities created and challenges experienced as a result of our interventions.Luke Marston, SFI Grants Manager, Innovation Resource Facility

Measurement, like implementation, relies on meaningful engagement with and incorporation of feedback from stakeholders. Most significant change (MSC), developed by Rick Davies, surfaces personal accounts of change, provides information about intended and unintended impact, explores what has contributed to change, and clarifies the values held by different stakeholders.[1] We leveraged MSC to develop a more nuanced understanding of outcomes achieved and surface deeper insights about the types of support that contributed the most to results. The dual value of applying MSC revealed the impact of the program from the lens of the social enterprises themselves. 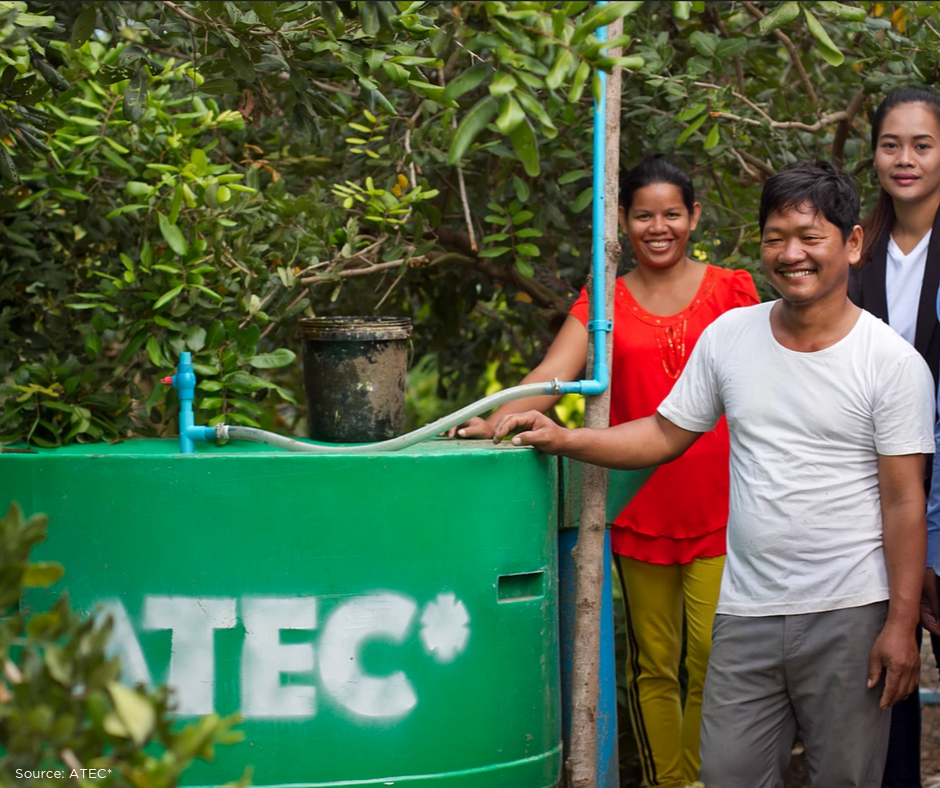 ATEC identified three significant changes that resulted from grant funding provided by Frontier Innovators. According to ATEC* CEO Ben Jeffreys, there have been three main changes as a result of Frontier Innovators, “the first is our entry into Bangladesh.”

Funding for market research (they were able to conduct seven market assessments and five scoping trips) under Frontier Innovators has promoted ATEC*’s ability to expand from Cambodia into Bangladesh. ATEC*, with partners Infrastructure Development Company Limited (IDCOL), iDE, Grameen Shakti and SNV Netherlands Development Organisation, has installed their first four biodigester demonstration systems in Bangladesh. “Bangladesh is hugely exciting for ATEC* as it’s one of the largest small-scale markets in the world,” says Jeffreys, “it’s also a floodplain country like Cambodia which our systems are designed for, has fantastic supply chains in place and strong support from the government. We are on track to enter Bangladesh by the end of this year and expect to see rapid growth.”

The other two significant changes, according to Jeffreys, are the introduction of Pay as You Go (paygo) financing and the ability to test digital inbound marketing strategies. With funding from Frontier Innovators, ATEC* designed and developed the world’s first patented paygo hardware for biogas that is integrated with Angaza paygo software. This development will further the company’s plan to bring scalable biodigester solutions to small scale farmers globally and build their case for further investment. Jeffreys notes, “Customer access to effective and scalable payment terms continues to be the biggest barrier for biodigester uptake globally.” The Singapore-based Impact Investment Exchange (IIX)l estimates that “the paygo model will enable 7,500 households to access clean energy, reduce exposure to indoor air pollution, free up over three hours per day per household — primarily for women — from basic cooking and fuel needs, and avoid thousands of 33,000 metric tons of carbon emissions per year.”[3]

Digital inbound marketing is a data-driven approach to attracting customers. In developing country markets, sales are often made through face-to-face interactions which can be labor intensive. However, continued growth of social media and its expansion into rural areas, has created the opportunity to expand ATEC*’s reach. For example, a recent Facebook add reached more than 100,000 individuals within two days.

These changes set ATEC* up to successfully undertake their Series B investment round. In August 2019, ATEC* announced that they had raised debt financing from US-based impact investor Beneficial Returns. IIX facilitated the deal through its Impact Partners platform. 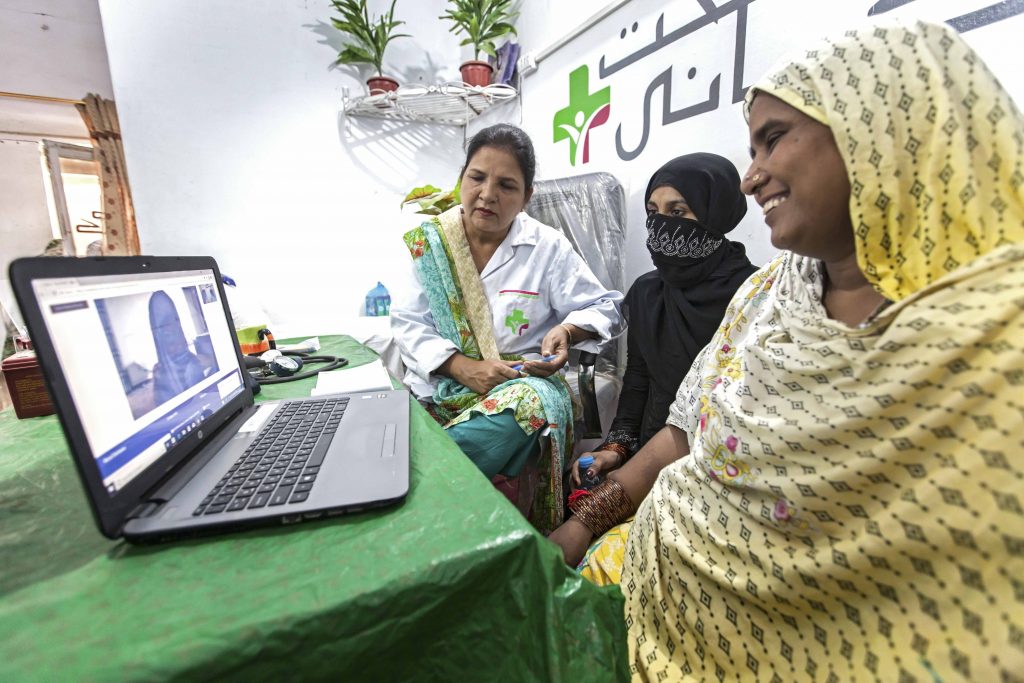 In Pakistan, social barriers often prevent female health professionals from continuing their careers and limit access to affordable healthcare within marginalized populations. Sehat Kahani seeks to address these problems by bringing female doctors back into the workforce and improves rural healthcare through women-focused telehealth solutions in Pakistan.

Dr. Sara Saeed, Sehat Kahani CEO, notes, “there were two most significant things we tried in Frontier Innovators: more geographical locations and piloting specialist clinics.” Resources from Frontier Innovators enabled Sehat Kahani to open four new clinics in three provinces in Pakistan. The funding helped conduct feasibility studies and qualitative research of patient’s needs, procure medical equipment, recruit and training staff, and mobilize community-focused campaigns before the clinics opened. As of March 2019, more than 7,250 patients had been consulted in target communities, and more than 35,000 indirect beneficiaries were reached through door-to-door mobilization and preventive health services in the target areas. Beyond providing health care access to new communities, the clinics have also enhanced local employment, by creating jobs and training opportunities for 25 female health professionals. Without Frontier Innovators, Seed notes, “we couldn’t do this because of lack of funding.”

The funding also allowed them to test hiring health specialists for their clinics. Funding was also used to research, develop, and introduce a Specialist Model in clinics and their telehealth platform. Specialists were recruited to deal with chronic diseases: gynecology, pediatrics, psychology, psychiatry, and diabetology, increasing access to its services in our target communities. “We started by adding five specialists based on local needs (pediatrics, psychology, etc.).” Saeed notes, “This model allowed us to introduce specialists to underserved communities. In particular, psychologists are a limited resource available to these populations where mental illness is a huge problem. It’s added a lot of value to the clinics.” Within the first few months, Sehat Kahani provided 1960 telemedicine consultations. They also increased telemedicine penetration towards specialist services by 25% in the target communities. Saeed concludes, “Since participating in Frontier Innovators our work has grown by leaps and bounds.”

The story of Sehat Kahani is featured in the documentary series Frontiers.

Our program Frontier Innovators, has supported a diverse group of 14 social enterprises from nine countries on their path to growth and has resulted in diverse outcomes, which cannot be neatly captured in a few indicators. If we used only traditional evaluation methods, we would have missed significant information about the outcomes of our program. The most significant change method was very appropriate and valuable as it enabled us to capture the diverse and rich stories of change over the life of the program and our ability to report the outcomes. Because MSC relies on a dialogue and ‘telling a story’ by our program partners, its value is also in strengthening the partnerships created through the program. Janka Gekova, Program Manager, Frontier Innovators

Through applying the MSC lens, we learned that taking a social enterprise-centered approach to evaluation, based on dialogue, can help us understand real change through personal stories. We were able to realize the dual value of MSC — developing a nuanced understanding of outcomes achieved and what factors contributed the most to results across the Frontier Innovators portfolio. Both ATEC* and Sehat Kahani credited flexible grant funding as catalysts for the change. Thirteen of the 14 Frontier Innovators we interviewed agreed that flexible funding was what contributed the most to their ability to realize these significant changes and maximize results. Analysis of MSC findings informed the final six months of the program and future program design.

Thank you for visiting the Frontier Brokers Network website. The resources here may be re-used and re-published in events, podcast streams, video channels, report databases, articles, and more as long as Frontier Brokers Network is referenced. For any further inquiries or to report any issues with the website, please contact Good Return (network convener) through support@goodreturn.org.